The first major SU London-organized trip of the semester was a weekend in Istanbul. The trip was life-changing and completely opened my eyes to an entire culture that I had never experienced before.

I could write a novel on all of the incredible things I saw and did but I’ll try to sum it up as best I can.

Faith and I woke up bright and early to take the tube to Heathrow. We hardly got any sleep the night before because we were too excited/saved our packing for the last minute.

Before we knew it, we landed in Istanbul Ataturk Airport. After getting through customs, the group took a bus to the Hotel Hali, which was located just off of the Divanyolu Caddesi, which is the main road leading through the city. The location was impeccable, because we were so close to so many of the main attractions. 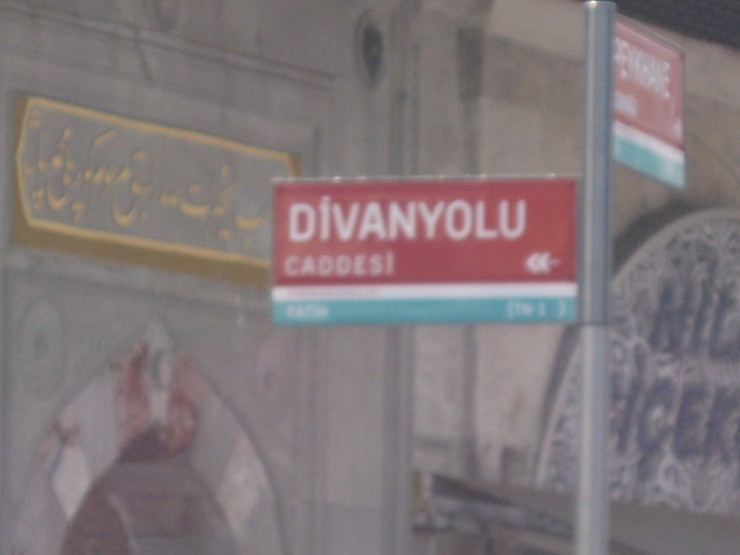 After settling in to the hotel, Charine (our group leader/trip planner extraordinaire) led us on a brief walking tour of the area so we could get acquainted with the city before exploring Friday. After dinner (we had lamb and meatballs–surprisingly bland) we strolled around for a bit, then headed back to the hotel to rest up for a long day of exploring.

After breakfast at the hotel (on a terrace that provided breathtaking views of the city), we headed to the Blue Mosque with our guide, Emel. All of the women had to cover their heads and legs before entering the mosque. The interior was gorgeous; I couldn’t believe how ornate the ceiling and light fixtures were! 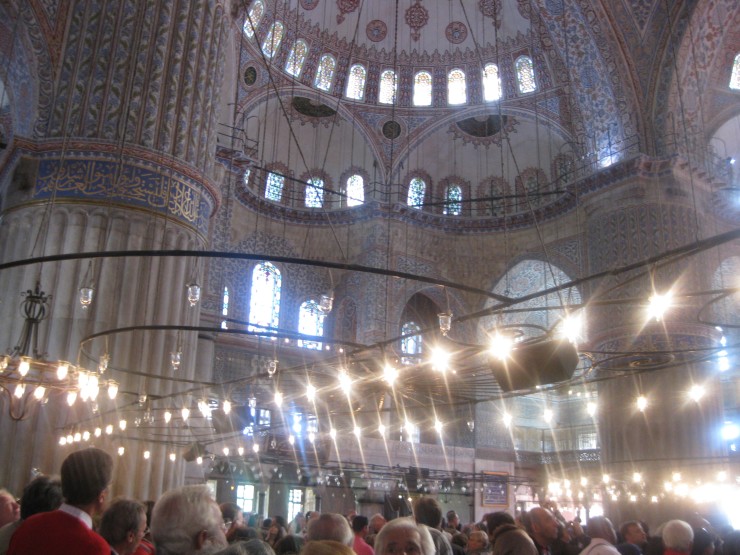 The next stop was Topkapi Palace, former home of the Ottoman Sultans. The palace was expansive (about 7.5 million square feet) and we managed to see some key sections, including the Harem, a number of courtyards and the Imperial Gate, among other things. I was impressed by how colorful everything was, especially the painted tiles.

After grabbing a doner pitta (basically chicken on a pita for 3.50 lira) for lunch, we headed out to visit the Haghia Sophia. It’s in remarkably good shape for being over 1,400 years old! The main room was massive, and the mosaics on the walls were gorgeous. The photos really don’t do it justice.

The underground Basilica Cistern was a short walk from the Haghia Sophia. It was built in the sixth century by Emperor Justinian and it looked like it is straight out of a James Bond film…because it is. Charine told us that it was featured in From Russia with Love. The cistern serves as a water filtration system, and features two Medusa columns, pictured. I couldn’t believe how massive the cistern was, and how architecturally advanced it was for its time.

That night, my friends and I went to Taksim, which is a trendy, buzzing shopping area of the city. It reminded me of Times Square, and even had a few American shops, including Sephora and the Nike store. The craziest part was seeing the American stores right next to Turkish stores, and seeing Turkish signs everywhere.  It was just one of many moments that reminded me that I was in a truly foreign country. Sometimes London feels too much like New York City, so it was nice to feel so far removed from the U.S.

We cabbed it back home and grabbed some corn from a street vendor as a late-night snack. Spoiler alert: the corn tasted horrible and was undercooked. However, it couldn’t put a damper on our amazing day.

Saturday was a bazaar day. Charine took us on a preliminary walk through the Grand Bazaar and Spice Bazaar. My head was spinning after so many of the vendors approached us and tried to sell us everything from scarves to jewelry. I found it fascinating that they could tell that we were American, since they greeted us in English, not Turkish or any other language. However, later in the day, I found myself chatting with vendors in Spanish and German. Most of the vendors were conversational in multiple languages.

Before we braved the bazaars on our own, the whole group had lunch at Hamdi Restaurant. Whoa. It was easily the best meal I’ve had since being abroad, and is definitely in the top ten meals I’ve ever had in my life. There were a number of vegetable dishes, as well as chicken and lamb dishes. We topped it off with some amazing baklava. I honestly can’t name every single food we had, but all of it was delicious.

After lunch, we headed back to the bazaars. (Charine said it’s smarter to shop on a full stomach because people tend to buy more when they’re hungry.) It was stressful but fun to bargain with the vendors. By the end of the day, my friends and I developed our own negotiating strategy and emerged with some pretty cool stuff to show for it. I even got to spend some of the U.S. dollars I forgot to exchange before I left home (oops) because the vendors accepted/often preferred foreign currency!

The highlight of the day (for me, at least) was our visit to Asia! We took the ferry to the Asian side of the city and had a delicious dinner and a lovely walk. This part of the city reminded me of Taksim (American brands scattered among Turkish shops) but every few minutes, it hit me that I was actually in Asia! It was a fairly surreal experience.

Our last day in Istanbul was bittersweet. After enjoying our last terrace breakfast, we headed to the Great Palace Mosaic Museum. The mosaics were extremely well-preserved and clearly depicted scenes of war and aspects of ancient Turkish culture.

After the museum, we did a bit of shopping and exploring before boarding the bus to head to the airport. With all that we saw and did, it felt like we spent at least a week in Istanbul. I’m so glad I went on the trip and experienced Turkish culture.

Thanks to everyone who passed along travel tips; they came in handy on the trip!